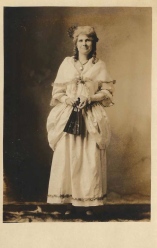 “Anabel Knight Powers Circa 1917” is the label on the back of this picture frame. A little research revealed only one Anabel Knight Powers in public documents. She was born in Texas in 1888 to William Knight and wife. She married John/Jack P. Powers in 1907 in Oklahoma. She lived apparently the rest of her life in Oklahoma and died there (McIntosh county) in 1972, ten years after her husband died.

I haven’t found anyone searching for Anabel or her family yet, but I will keep looking. It’s an absolutely lovely photo and comes in a beautiful frame. The picture, by the way, was framed in Houston, TX.

The Evans family, Father, son and wife. Picture from Lima, Ohio. They all look so much alike it’s almost scary!

Based on some brief research, I believe this is likely Evan R. Evans who married Hattie Bussert (hence the nickname Buzzard) in Allen, Ohio in 1895. Their son is Guy W. Evans, born in 1898 also in Allen, Ohio.

This is Vivian and Lloyd Mann. The picture, according to the photographer’s stamp on the frame, is from McGregor, Texas. Luckily with two names and a location the children were easy to find in the 1910 and 1920 census.

Vivian is the first child born to John Mann around 1908. She and her little brother Lloyd, who’s only 1 year younger, were both born in Texas. This picture was probably taken around 1911 or 1912 considering how young they are.

In the 1910 census a 22 year old John, his brothers and sisters, along with Vivian and Lloyd (babies) are living with John’s parents, Vivian and Lloyd’s grandparents. John is listed as a widow. By 1920 John appears to have remarried, to Myrtle, and has a 3rd child with the new wife, a Jennie Myrtle Mann. I’m curious what happened to Vivian and Lloyd’s mother.

Not only do I love this baby face, I love the little outfit he has on. According to the back of the picture, this is baby Lester Alan Richey, aged 6 months and 17 days. But no date of course!

The style of the photograph and how it’s mounted suggests it was taken in the 1920’s or 30’s. That information was corroborated when I did a little research on D. Perry Evans Photographers from Portland, Oregon and found this:

D. Perry Evans, a leading photographer of Portland, conducting the Rose Studio in the Washington building and recognized as an artist of unquestioned skill, was born in Oshkosh, Wisconsin, in 18S0

took up the study of photography and there continued active along that line until 1907 when he came to the west, taking up his residence in Portland where he has since remained

This information comes from The History of Oregon, Vol. 2 by Charles Henry Carey.

I have not yet found other historical documents to back up this cutie pie’s pic – but when I do, I’ll be sure and post it! 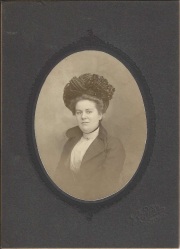 I just love this picture, what a hat! In researching Edith I looked for information on a woman whose maiden name was Keifer and a woman whose maiden name was Rhienhardt with a married name of Keifer. The later generated results. While it’s not definite, I’m fairly confident in saying that, based on the documents I’ve found, this is Edith P. Rhienhardt, born in Medina, Ohio in 1880. She married Honor S. Keifer on June 3, 1911 at the age of 30.

This is Mr. Louis Good. The picture was taken by Fenner in Lima, Ohio. While there are too many Louis Goods in Ohio to narrow down who this might be, I liked the picture too much to pass up.

Mrs. John E. Watkins sure gets around. This is the 2nd photo she’s been mentioned on and there are probably more at my local antique store. So clearly this couple is connected to the Davis family since Susan Davis and Mary Jane Griffith are both sisters of Mrs. John E. Watkins.

This photo was taken in Lima, Ohio. Photographer is Krauss & Edersole.

This was a challenge, but I believe I did find all three of these ladies identities. It helped that two of them had full names on the back. Another huge help is the location of the photographer embossed on the frame – Washington, Illinois. Next I did some guess work around the age of the photo (early 1900’s was my guess based on dress) and of the ages of the women. Ida I presumed to be 35-40, Ada around 20-25, and Lizzy about 40-45. Initially I worked with a theory they they were sisters, that would be the easiest find after all.

Ida Guth was the easiest to find. She and husband Samuel are living in and around Washington in the early 1900’s. When I found her Maiden name of Ropp, there were unfortunately no other Ropp daughters that would have been her sisters. So the search continued with the theory that they might be cousins. That search took me to Ida’s parents siblings. It turns out Ida’s mother, Mary, did have a sister named Lizzie. But the real jackpot was the 1910 census in Washington, IL where Ida’s grandmother Catherine Kennel is living with her daughter Lizzie and her granddaughter Ada Nafziger. Bingo!

So it turns out Ida’s grandparents Catherine and Jacob Kennel had a lot of kids. Mary (Ida’s mother) was born in 1854. Lizzie (Ida’s aunt) was born in 1874 only 4 years before Ida herself was born. Ada turned out to be the daughter of another sister Amelia, born in 1857. Ada was born only 10 years after Lizzie in 1884. So I wasn’t too far off on the difference in the women’s ages.

While I don’t know the definite date of the photo, we do know That Ida Ropp Guth is pictured here with her niece Ada Nafziger and her aunt Lizzie Kennel probably around 1900.

I love it when a puzzle comes together!