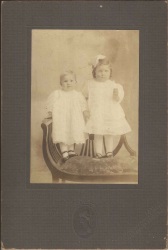 This is Vivian and Lloyd Mann. The picture, according to the photographer’s stamp on the frame, is from McGregor, Texas. Luckily with two names and a location the children were easy to find in the 1910 and 1920 census.

Vivian is the first child born to John Mann around 1908. She and her little brother Lloyd, who’s only 1 year younger, were both born in Texas. This picture was probably taken around 1911 or 1912 considering how young they are.

In the 1910 census a 22 year old John, his brothers and sisters, along with Vivian and Lloyd (babies) are living with John’s parents, Vivian and Lloyd’s grandparents. John is listed as a widow. By 1920 John appears to have remarried, to Myrtle, and has a 3rd child with the new wife, a Jennie Myrtle Mann. I’m curious what happened to Vivian and Lloyd’s mother.

6 thoughts on “The Mann Siblings”