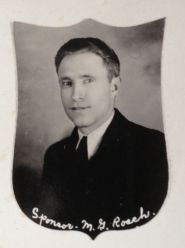 Rather than focus on another student of Osmond, Nebraska High School, I decided to research the “sponsor” as he’s identified in the photo. M. G. Roach was Melvin G. Roach. In the 1940 census he was listed as the Principal or teacher of the public High School in Osmond, Nebraska. This handsome young man was 32 at the time of this photo.

Melvin was born in South Dakota on January 30, 1906. His parents were Frank G. and Minnie Roach. Frank was a farmer, originally from Ohio and Minnie was born in Iowa. In 1910 and 1920 the family lived in South Dakota. By 1930, Melvin had become a teacher like his oldest sister and moved to Osmond, NE where he was a boarder. One short year later on April 11, 1931 he married Olinda Rhode, a native Nebraskan. They had two children in the 1940 census.

Melvin died on February 5, 1998 and is buried in St. Mary’s Catholic Cemetery in Osmond. I found an online obituary for Mr. Roach:

His wife, 4 brothers, and 3 sisters all died before he did. But he was certainly not alone with 2 children, 12 grandchildren, and 18 great-grandchildren! I’ve added his photo to the FindAGrave memorial as well.