Another partial name from the 1932 class of Wakeman High School near Lorain, Ohio. On the back of the photo, all we have of the name is *RALD ROGERS. Initially I thought the D was an O. But I could find absolutely no one with the name *RALO ROGERS. Then it dawned on me that it was indeed a D!

So Gerald Rogers came to life (again). There is one definitely Gerald Rogers that is bound to be our man. In the 1930 Wakeman, Huron County, Ohio census, Gerald is a 16 year old born in Ohio to parents also from Ohio. However, he’s living as a lodger (not working) with Gage and Gertrude Garner. Because he’s not living with his parents or anyone identified as family it makes comparing our Gerald with other Gerald’s harder.

In 1940, there is another Gerald Rogers still in Huron County. He’s 26 now, a farm hand on the Sweeting farm, married to Eleanor Rogers (21). Hard to know if it’s the same George but there is more than a little likelihood that it is.

Another Gerald Rogers in Ohio that comes up is Gerald Ernest Rogers, lets call him GED. GED was born 11/18/1913 in Lima, Ohio. His parents were Robert Rogers and Edith Ryerson. GED died in California on 2/27/1989. In 1920 in Kenmore, Summit Co., Ohio GED lived with his dad, step-mom, 4 siblings and grandparents (John & Ida Rogers) on his grandfather’s farm.

In my opinion, GED is our Gerald Rogers. By 1925, GED’s dad has married for the 3rd time. In 1930 older brother Howard is a lodger elsewhere, grandparents John & Ida are living with a sister of GED’s, dad Robert (now a widower again – this guy was trouble!) and another sibling Hazel are living in Cincinnati. In other words, the family is spread out all over the place. It would not be surprising that Gerald was living as a lodger. What would be surprising is if the Garner’s (with whom he was living) were not somehow related or at least close friends of the family. Maybe actual family can fill us in!

I’m sure hoping we can find your descendants Gerald!

Yes, Another chopped off name from Wakeman High School in Huron County, Ohio. This one seemed straight forward, ____herine Salzman. What else besides “Catherine” or “Katherine” could that really be? So I was shocked when it didn’t turn up much. (Although I shouldn’t be shocked by any research hiccup at this point!)

But I think I’ve found the identity of this lovely lady. Kathryn Salzman was born in 1916 in Ohio to Walter Salzman and Edna Johnson. She was the second oldest of 6 siblings, including Louise, Stella, Grace, Robert, and Charlotte. Lovely classic names! In 1930, 2 years before this photo the family lived in Lorain, Ohio – not far from Wakeman. Walter was a dairy farmer. In 1920 Ohio census the last name appeared as “Saltzman.”

Something happened by 1940. Brother Robert lived with an uncle in Pittsfield, OH. John Glynn (but mom’s maiden name was Johnson?) and a John Salzman as well listed as “Helper”. Robert is listed as “nephew.” Sister charlotte lived with her grandparents, Conrad and Ida Salzman in Camden, Lorain, OH. Where is Kathryn?

Walter apparently lived until 1968 in Lorain, OH. Edna died young in 1933, which explains why the children may have been split up to live with relatives. According to Edna’s death certificate her death was related to third degree burns. Robert was not far behind his mother and died in 1943.

As for Kathryn, I’m not sure what became of her. Hopefully a searching family member will! 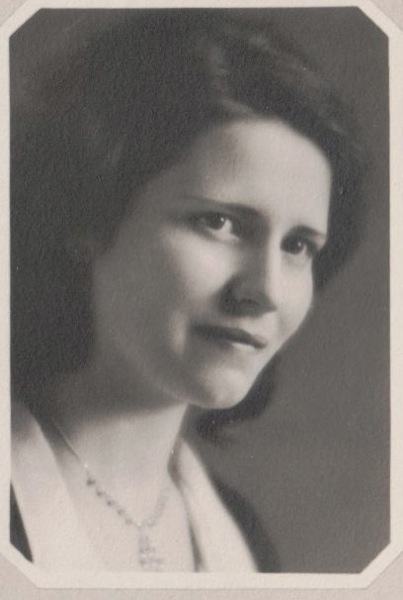 “…rie Pettiford” turned out to be Marie Pettiford. The class photo you see on the left has most of the first name of each person cut off. I wasn’t sure how easy they would be to find. But the last person on the list was also the only black person in the class. So when I looked for a female, unmarried Pettiford born around 1914 who lived in Huron County, Ohio one person came up. And luckily her first name ended in “rie”!

Marie E. Pettiford was born on Valentine’s day 1914 to Herman E. Pettiford and Myrtle Stafford. Her father was a barber. She had one brother, Robert who was about 3 years older than Marie. Her family lived in Wakeman all her life. They are in the 1910, 1920, and 1930 census. However by 1930 her father was a widow. Myrtle died in 1921 at age 28. The death certificate states the cause of death was exophthalmic goiter. Huh? I had never of heard of this. One website defines it as “hyperthyroidism with protrusion of the eyeballs.” I’ll let you google the images.

Marie Pettiford, age 18. One year before her death.

Her daughter was even younger when she died. The lovely Marie Pettiford died at age 19, one year after this photo was taken. On March 22, 1933, according to the death certificate, Marie died of a heart attack due to “surgical shock” during a laparotomy. A laparotomy was basically abdominal surgery. Why she was having surgery is unknown, maybe some form of hyperthyroidism like her mother. Whatever the reason, her body couldn’t take it.

By 1940 her father and brother are living together and working as barber’s in Mr. Pettiford’s barber shop; feeling quite lucky to be alive I imagine.