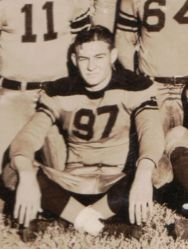 I just can’t resist these Wink Wildcats. A rugged Texas team of young men, many of whom would go off to war, and Beekman Ezell was no exception. Born on December 5,1919 in Louisiana to Jefferson Ezell and Pearl White, Beekman Benjamin Ezell was the 2nd of four children born in rapid succession. Older brother Jeff was born in 1918, Beekman in 1919, Dee Earl in 1921, Don in 1922!

It appears that dad, Jefferson Ezell, died in 1925 in La Salle, Louisiana where the family had lived. Pearl remarried by 1930 and she and her children lived in Wink, Texas with new husband Hobart Little. The children are actually listed with the last name Little in this census. But that’s corrected by 1940, when the family is still in Wink.

Beekman enlisted in the war effort for the army in 1941. He was single at the time with 2 years of college. He was released from the arm in 1945 and went back to college at Texas Christian University in Fort Worth, Texas, and he also went back to playing football. A 1946 newspaper article discusses the issue of vets who receive disability payment playing football. They, and Beekman was mentioned by name, would have to take a physical and if they didn’t pass, choose either football or benefits, but not both.*

Beekman appeared to live in or near Winkler for most of his adult life. Beekman Ezell died August 19, 1999. He was preceded in death by his first wife and remarried, passing away before his 2nd wife. He is buried in Kermit cemetery. A wonderful obituary of his brother Don on Find a grave, outlines more of the family history.

Looks like serving their country and TCU football were in the Ezell boys’ blood!