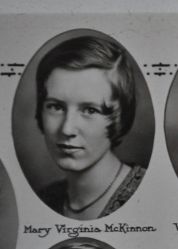 This is one of those photos that I just had to force myself to stop researching! Still so much to find out, but I do have enough to pass on to a hopefully searching descendant.

It appears that only Mary’s birth and her parents marriage (Canada) took place outside of Michigan. Why the family was in Oregon is unknown, other than it was likely work. Mr. McKinnon worked as a salesman for steel products. His daughters lived at home at least through 1940 when Mary was 27. Neither of the girls were listed as having a job. If they married after that is unknown. Donald McKinnon’s death and aunt Cordelia’s were confirmed through the Social Security Death Index and Find A Grave.  I can’t find when/where wife Dorothy passed away. But there are University of Michigan year books from 1910 that show she was a student there. She and Donald married in 1912.