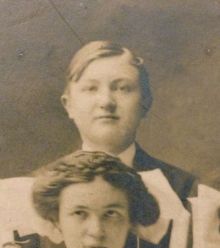 Lest you think I’ve been focusing too heavily on the young ladies, here’s a male student from the Manierre school. Like his classmate, he was about 15 in this photo (born January 9, 1896) and lived in Ward 22. Roy Clarke was actually Leroy Rudolf Clarke, and yes he would grow up to be a bookkeeper (among other things).

Roy never married and had no children so I doubt there are any descendants searching for him, but he deserves a little history nonetheless. Roy was the son of John H. Clarke and Louise Dahnke. Born in Illinois, he had one older brother Harry. I don’t know if Harry ever married. In 1900 and 1910 the family lived in Ward 22 of Chicago where dad John was a teamster. In 1900 his aunt Alta also lived with them.

By 1920, Roy was working as a bookkeeper, still living with his parents, as was his brother. Both dad and brother were chauffeurs. 1930, in Ward 39 now, Roy was keeping books, Harry had moved on, but grandma Dahnke (maternal grandmother) lived with the family. She would die in 1935 and is buried in Montrose Cemetery in Chicago.

1940, maybe because of the depression, who knows, Roy was no long a bookkeeper but doing “odd jobs, house cleaning”. Even on his WWII draft reg card he listed his profession as “odd jobs”. This could not have been very fulfilling for the no-longer-so-young 44 year old Roy. He was still at home and unmarried.

According to the Social Security Death Index, Roy died in Peoria, IL in October of 1975. His brother had died about 10 years earlier in 1964.

This one is not as cut and dry as I like. There are two real possibilities for a Julia Howard who lived in Chicago in 1910 – the date that this graduating class from Manierre School in Chicago was taken. One of them, (Julia 1) is the daughter of James and Margaret, born in 1893; the other (Julia 2) is the daughter of Julia F. Howard and unknown father born about 1894.

I believe Julia 2 is our woman. For one thing, she lives in Ward 22. I know, I know! I may be putting too much weight on Ward 22 – which is where all the other children from this class that I’ve researched have been from. It is a compelling factor at this point. But that can’t be the only reason I choose her. Julia 1 lives in Ward 31. Now, considering I’m not completely sure where the Manierre school was at this time it’s hard to know who lived closer. In 1910 Ward 22 and Ward 31 were not really close to one another. Therefore, unlikely that someone would live in Ward 22 for example and school in Ward 31.

Julia 1 also was listed as working at a grocery store in 1910. The census was taken in April of that year, when school would have likely still been in session. Although, true the picture may have been taken earlier and she may have been working in the afternoons, etc., etc. There are many reasons why Julia 1 may still be our girl. For the sake of Ward 22 I’m going with Julia 2!

In 1910, when this picture was taken, Julia 2 was about 17. She and her brother Walter lived as lodgers with the family of Ellen Rowan. In 1900 she and Walter lived with their mother and another brother named Kirby who was 15 at the time. They lived in Ward 11 in 1900 (not to far from Ward 22). In 1904 Julia’s mother, also named Julia, died of natural causes. Older brother Kirby, and Julia 2 for that matter, have not been found in any other documentation other than those census records. I don’t know what happened to Julia’s father – he doesn’t appear in the picture ever. And I don’t know her mother’s maiden name. So much still not known – and no one searching for this beauty that I can tell.

With that wonderful hairdo too! Good luck Julia.

To truly appreciate this class photo from 1910 you have to see the back – with names carefully listed out by Edmund Lundgren. I’ve used the back as the main photo on this post. Today’s real highlight, however, will be … END_OF_DOCUMENT_TOKEN_TO_BE_REPLACED