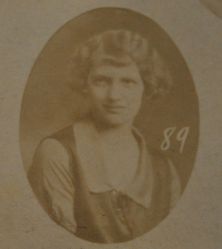 What a wonderful find! This young lady comes from the 1924-1925 class picture at Westbrook Commercial Academy in Olean, New York. I’ve randomly decided to start with her, but will work my way through the rest of the class!

This appears to be Geraldine Scofield, daughter of Frank and Bertha Scofield. She was born in Pennsylvania in 1906. The family then moved to New York and in the 1920 census they are living in Olean. Geraldine has a sister, Gladys – she is not pictured in this class photo, she’s one year older than Geraldine. A 1922 Olean city directory does list both girls as students however. It’s possible Gladys has already graduated.