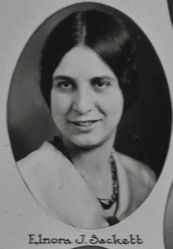 Ms. Elnora Sackett has such an interesting face. She was a classmate of Viola’s (from the previous post) but a few years older than her peer. Born in 1910, Elnora J. Sackett was almost 20 when this high school picture was taken. She was born on October 13, 1910 – luckily for her that was a Thursday, not a Friday. Her parents were Jay and Mary Sackett. Jay lived from 1889 to 1945. Mary lived from 1883 to 1873, almost outliving Elnora, who died in Livonia, Michigan in 1978. I wonder how Elnora died, at a relatively young age of 68, when her mother lived to 90? All three are buried in Riverside Cemetery in Plymouth, Michigan.

Elnora appears to have never married. She and sister Margaret still lived at home in 1940 (in Plymouth) and worked as press operators for a air rifle manufacturing company – Rosie the Riveters! The family lived in Plymouth all her youth from 1920-1940 and probably longer. Father Jay didn’t live with the family in 1940 but doesn’t die until 1945. He’s likely too old to have been at war though. I wonder if she and Viola were friends?