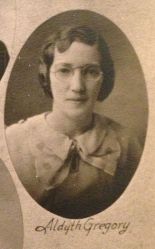 Aldyth Gregory, a great name, one you don’t hear anymore. Aldyth was one of 10 graduates in 1935 from Macon High School in Macon, Illinois. It’s a wonderful class photo; I can’t wait to share all the graduates with you.

Aldyth was born April 20, 1917 in Zion, Illinois to Luther Carl Gregory and Anna Jones. Carl and Anna were married almost 10 years before their first daughter was born, so it would seem. Robert followed Aldyth 4 years later, and Gertrude one year after Robert. Carl Gregory was a dairy farmer.

The family lived in Mount Zion, Macon, Illinois in 1920 and in South Wheatland, Macon, Illinois in 1930. Mr. Gregory passed away in 1939 and I was unable to find a 1940 census record of Anna and her children. In 1947, at the age of 30, Aldyth married Howard Kiesling. She became a step-mother and eventually had a daughter of her own.

Aldyth died on January 10, 2006 and is buried in Havana, Mason, Illinois where she had been a teacher for many years. One touching flower on her Find A Grave memorial says “my kindergarten teacher and was a very kind lady.”

I hope her name (Aldyth) lived on with descendants, as well as that sweet smile :)