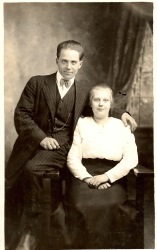 This photo is the epitome of a young immigrant couple ready to make a life of their own in America – Brockton, Mass to be exact. They look pleased as punch to have just gotten married. “This was taken Sat evening Nov. 10, 1917,” reads the photo. Likely a wedding date. The names on the back are of Mr. Seivi Harju and Miss Tyyra Kivinen. The second photo, of the two my teenaged son purchased me for christmas at the local antique store, is addressed to Tyyra Harju of Brockton, Mass and the rest is in Finnish.

Back of wedding photo

I love the connection between these two pictures, the newlyweds and then the letter from home; with probably as many relatives as they could get in one picture to send to the couple. With a little research, I was able to piece quite a lot together about the family life of the Harju’s. And as is typical, is starts with a death.

The Father: Seivi John Harju’s death certificate says it all. He was born in Vaasanloani*, Finland on October 19, 1891/2 to Alexander Harju and Marie Ahola. He spouse was Thyra E. Kivinen. He worked as a weaver in a webbing mill. He died in Stafford, Fort Bend, TX on September 26, 1982 and was buried in Mt. Vernon Cemetery in Abington, Plymouth, MA. Through federal census sources we know he lived in Plymouth county, MA; and that he came to the US in 1914. He had two children: Linnea in 1919 and Allen John in 1924. Seivi worked his entire life as a weaver; in Brockton in 1930 it was in a cotton mill, in the 80’s it was in a webbing mill in Stafford, Texas.

The Mother: Tyyra/Thyra Kivinen was born on June 6, 1899 in Finland, although the exact location is unknown. I don’t have her death certificate as she’s died more recently, May 8, 1993 also in Stafford, TX. These dates are based on her headstone, which can be found on Billion Graves. She was 19 when she married Seivi. We don’t know who her parents are. There is a 10 year old child of her name who comes to New York via the ship Mauretania from Liverpool apparently by herself on July 3, 1909. Is this the same woman? She and her husband were long lived; Tyyra died at age 93.

The Daughter: Linnea Elizabeth Harju was born on November 10, 1919. Photos of Linnea can be found in the “Brocktonia,” the high school year book from Brockton in 1937. As well as the yearbook of the State Teachers College from 1941 where she attended with an ambition to be an organist in a big church! She married Theodore K. Maki, but the two appeared to have no children. Linnea died in February of 2007, 4 years after her husband.

The Son: Allen John Harju would serve his country in the second world war. The photo below is an exert from the 307th Bomb Group Records and gives details of his service. Allen was born on October 8, 1924. He is the only member of the family for whom I could find an obituary. From The Enterprise of Stafford, on September 5, 2008, Allen died on August 15 of that same year. His parents, sister, and wife Lois Brantly had all preceded him in death. He too had no children.

The family appeared to have been close. They lived together, moved together when the family relocated to Texas, and are all buried together. Even the spouses are listed on the same gravestone in Mt. Vernon cemetery in Abington, MA. It would be interesting to know when they came to Texas and what brought them down. And while there are no grandchildren researching this lovely couple. I do hope some extended family find and cherishes these photos…and reads Finnish!

*The city of his birth is from the 1942 World War II draft registration card technically.