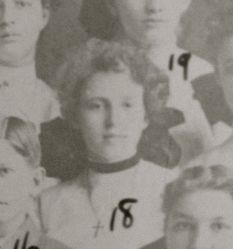 Blanche Rambo is number 18 on the nicely identified high school class picture in Seneca, Kansas, 1908. (You can see the full photo in this post.) Her known story is a short one, I’m hoping others can fill in the blanks.

Blanche was almost the only child to Elmer Elsworth Rambo and Jessie L. Richards. She was born in Nebraska in 1891 and was without a sibling until 1908 when younger sister Lucile was born the year this photo was taken. The small family lived in Seneca during the 1900 and 1910 census where Elmer was a brakeman for the railroad. In 1900, Blanche’s maternal grandfather Francis Richards lived with them.

It’s likely that Blanche married and moved on shortly after this photo but no evidence of her marriage, residence, or death can be found. The same is true for sister Lucy. Her parents and Lucy continued to live in Seneca through 1920. But, at least by 1929, maybe sooner, Elmer and Lucy had moved back to Nebraska where they had married in 1889. In 1930, the elder Rambos were both working in Gage County, NE for the Nebraska Institute for Feeble Minded; Elmer as a shoemaker and Jessie as a laundress.

I certainly hope you find some descendants Blanche!