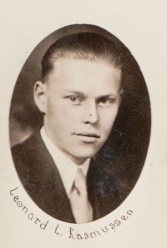 Leonard Luvern Rasmussen, the elder, born in 3 days before Christmas in 1912 in Filmore county, Minnesota. Marie Francis Rasmussen, the younger, born in on Christmas day in 1913 also in Minnesota. Siblings almost exactly one year apart! Parents: George R. Rasmussen and Minnie A. Norton. While not the same age they were in the same grade at school, both were class of 1931 in Preston High School in Preston, Fillmore, Minnesota.

In 1920, George and Minnie and their three children, Leonard, Marie and Phyllis lived in Canton, MN. George worked as a thrasher on a grain turbo – sounds exciting! The children were 7, 6, and 4 respectively. By 1930 (one year before these photos) the family had moved to Preston. George, born in 1884 in MN was only working at “odd jobs” then at the beginning of the depression. His parents, Marie and Leonard’s grandparents, were from Norway. Mother Minnie, almost 10 years George’s junior was born in North Dakota. 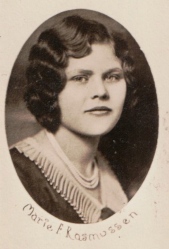 Interestingly I can’t find any of the family in 1940. Where are they??

I don’t know if Leonard ever married. He died in 1978 and is buried near his parents in State Line Methodist Cemetery in Filmore County, MN. The same is true for Marie. Did she marry, have kids? I don’t even know where she’s buried. The documentation won’t reveal…yet. She was a lovely woman. I hope she passed those genes down to someone ;)

Rasmussen families – any news on these siblings?

2 thoughts on “The Rasmussen Siblings, Leonard & Marie of Minnesota”