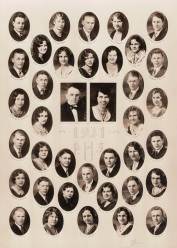 This is the 1931 high school class photo of Preston High School in Preston, Fillmore county, Minnesota. A previous post from Preston HS focused on the Rassmusen siblings from this class. Today, it’s Wesley E. Johnson. Thankfully his middle initial is used in most of the historical documentation, or his identity might be less clear.

For the census records of 1920, 1930, and 1940 (encompassing released censuses from his life) the family lived in Preston, MN. Father John A. Johnson owned a hardware store in 1920, didn’t have any job listed in 1930, and was a life insurance agent by 1940. His mother was Anna Louise Knutson. Wesley’s paternal grandparents were from Sweden and the maternal ones from Norway. 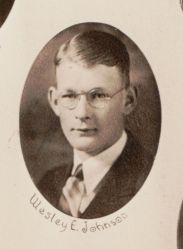 Wesley was born on February 2, 1913 in Minnesota. He had one brother, Robert, who was 2 years younger than he. In the 1940 census Wesley was still living at home at age 27, although his brother wasn’t. He was listed as having 2 years of college, but no job. Possibly he was still in school. Then there’s the long absence of information that is typical after 1940. One clue, a US Public Record from Dayton, OH in 1995, lists him as “Rv Wesley E. Johnson.”  Was he a Reverend? Wesley resurfaces only in death.

On July 1, 2001 Wesley E. Johnson died in Montgomery county, Ohio. He was listed as married, and his mother’s maiden name was Knutson. Mother Anna appears to be buried in Oakwood Cemetery in Redwing, MN. She died in 1980. However, her husband John and sons are not listed there.

One thought on “Wesley E. Johnson, growing up in Preston, Minnesota”