Back to one of my all time favorite class photos, the Fifth Grade class of 1934 in McKinley School of Peekskill, NY. These kids really draw me into that photo for some reason. Anthony Moretti’s smile is particularly infectious :) … END_OF_DOCUMENT_TOKEN_TO_BE_REPLACED 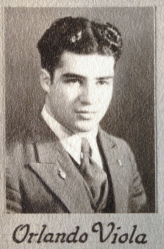 Orlando Viola was 18 in this class photo from Williamsville Township High School in 1934. He was the son of Nikolas “Nick” Viola and Maria “Mary” Jannesse, both Italian immigrants. Nick and Mary married about 1911 in Illinois. They would have 8 children in all, Orlando was their second born, and first son. From at least 1920 to 1940 the family lived in Fancy Creek, Sangamon county, Illinois; the same county as the high school. Mr. Viola worked as both a coal miner and a road laborer.

In 1940, Orlando still lived at home and was working as a railroad laborer with his high school education. But on February 18, 1942 he decided to join the army. His mother died the same year. Per his army enlistment record Orlando was married at the time. Younger brother Julio would join him in the army.

Orlando’s parents lived out their lives in Sangamon county (near Springfield). They are buried in Calvary Cemetery there; as are many of his siblings. Orlando’s burial location is unknown to me. According to SSDI he died in 1977 while living in Virginia. He may have been the only one of the Viola children to leave Illinois. 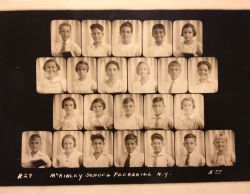 What a wonderful photo this class makes. This is the 1934 Fifth grade class of McKinley School in Peekskill, New York. I love the way the individual pictures are arranged and the background – they really do look like little angels!

I’ve randomly chosen one of these youngsters to research. His name is Joseph Palmiotto (2nd row from bottom in the middle). Joseph was born in New York in 1923 to Italian immigrant parents. He would be about 10 in this photo. Pascuale and Philomena Palmiotto (that’s a mouthful) likely married in New York. Pascuale came over in 1911 and Philomena in 1921 – according to the 1930 census of Peekskill. Pascuale was a yeast maker. I can only imagine the yummy pizzas in that household! 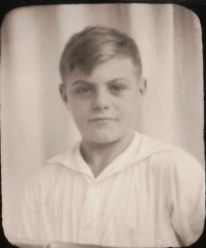 Joseph was their first born of eight children – at least that’s all they had had by 1940. He died in New Jersey in 2003, just a few days after his 80th birthday. His parents are buried in Assumption Cemetery in West Chester County, NY along with several siblings. But Joseph is not there.

That’s about all I’ve discovered in my quick search on Joseph. I hope to find a family who would enjoy seeing him as a spry 10 year old!