I’m so excited to be almost finished with another diary. This is the longest one I’ve transcribed to date and I have November and December left to finish. But my excitement is getting the better of me. Henry Gilbert kept … END_OF_DOCUMENT_TOKEN_TO_BE_REPLACED

Back to one of my all time favorite class photos, the Fifth Grade class of 1934 in McKinley School of Peekskill, NY. These kids really draw me into that photo for some reason. Anthony Moretti’s smile is particularly infectious :) … END_OF_DOCUMENT_TOKEN_TO_BE_REPLACED

Professor Zimmer may have gone unidentified if not for the 1892 New York census. He looks quite young to be a professor and indeed he was. Born in 1868, he was about 20 in this photo from 1888 of the … END_OF_DOCUMENT_TOKEN_TO_BE_REPLACED

Mary Burke #88 – This name is so common that without more information there’s no way I can narrow the identify of this young lady down. No one by this name, or close to her age was living in Cattaraugus county, New York in the 1925 census – or at least wasn’t recorded! But maybe a family member will recognize the name and/or photo and she’ll find a home after all.

Magdalene had a very sweet young face. She was about 21 or 22 in this photo. She would soon be a full time stenographer at the Gouranda State Homes Hospital in Erie, New York. But in 1925 she lived with her family. Father: Charles Weinman (1871-1941), mother Christina Frey (1873-1965) and brother LeRoy (1904-1980). For all of Magdalene’s life up until 1930 she lived in Wellsville, Allegeny, New York – right next to the county where Westbrook Commercial Academy was. She was the first of two children, born the year after they were married, 1903.

Unfortunately I know little about Magdalene past the 1930 census. Wait, make that nothing. I know nothing past 1930. :(  In 1940 her parents were still in Wellsville and her father would pass away a year later. Both Charles and Christina are buried in Sacred Heart Cemetery in Wellsville. Did she marry? Did she die? Did she move? Right now I have no answers, hopefully a family member does. It seems odd that there is information on every other family member other than Magdalene after 1930, but sometime that’s just how it goes.

I don’t believe Mr. MacDonald has any direct descendants looking for him, although I hope I’m wrong. A colleague of Mr. Christie and Mr. Gaines from the 1888 Eastman Business College photo, Professor A. C. MacDonald was Alexander MacDonald of Canada. He was born about 1855 and although his exact date of entry to the United States isn’t known to me, he was definitely here by 1886. That’s when he married his wife Elizabeth D. MacDonald. They had one child, named after mom, born in 1888.

Professor MacDonald and family show up in Poughkeepsie, Dutchess county, New York in the 1892 NY census (unlike Mr. Christie), the 1900 census and the 1910 census. MacDonald was a life long teacher apparently. I can’t confirm his location in 1880 – he may have still been in canada. And no record of any of the 3 family members seems to extend past 1910 – even the daughter. But my research hasn’t been deep.

Interestingly in 1900 there were 2 foreigners living with the family. A Jorge Juan Soroa, an 18 year old male from Cuba whose parents were Spanish; and N. Tamaoki, a 19 year old male from Japan. Were these foreign students attending his school? Much like exchange students of today – although they weren’t exchanged per se since the younger Elizabeth (12 at the time) was still at home. Mr. Soroa traveled to the US several times after that based on an “Alien Arrivals by Airplane” list and other documents.

I like a lot of solid evidence, any historian does, so this makes me nervous. Prof. S. N. Christie, of the 1888 Eastman Business College, pictured here, is probably the man I will describe below. His identity hinges on one census record that describes the man in my hypothesis. He is also the only man that comes up – there were not a plethora of S. N. Christies in Poughkeepsie. So, assuming my hypothesis is right, this is likely your guy.

S. N. is Samuel N. Christie. Born in 1849 in Maine – although his birthplace appears as PA once and NY once, other than than ME it is! The census record I’m placing all my hope on is the 1880 Poughkeepsie, Dutchess county, New York federal census. This is the closest federal census to the date of the class photo and unfortunately the 1892 NY census records don’t extend to Dutchess county. In 1880 Mr. Christie is about 30 living with his wife Rosella and two small children Mabel and Frederick. And here’s the real hinge, he’s listed as a teacher. Ok, good possibility!

Unfortunately “Professor” Christie had a change of heart at some point and became an insurance salesman. EVERY OTHER document he appears in have his occupation listed as Insurance agent or salesman – son Harvey went into the biz too. Samuel died in 1923 in Connecticut, as did much of his family, daughter Mabel, son-in-law Henry, wife Rosella, probably his son’s but I couldn’t confirm that.

So there it is, my weak argument – I’m hopeful a family member can shed light on him and confirm the identity.

Not everything can be uncovered. I know precious little about Marian O’Connor. Specifically I don’t know if she ever married and had descendants who might be looking for this adorable 5th grade photo. She might even still be alive and kicking! Here Marion is about 9 attending McKinley School in Peekskill, New York. She had a younger brother, Eugene, who would have been 6 or 7 at the time of this picture. A few census records are all I have to give me an inkling of who Marion/Marian was.

In 1925 the family, Peter O’Conner and wife Mary Krovjansky/Kravyanski lived in Cordlandt, New York. Mary’s father, Marion’s grandfather, lived with them. He was from Austria/Hungry. In 1930 the O’Connor’s had moved to Peekskill where Peter worked in a Food products company, Mary’s father was still with them. Mr. O’Connor had worked his way up to “yeast master” (a common profession in Peekskill apparently) by 1940. Both of Marion’s parents are buried in Assumption Cemetery in Cortlandt. Her father died in 1946 and her mother in 1977.

Here’s to hoping someone stumbles across Marion! 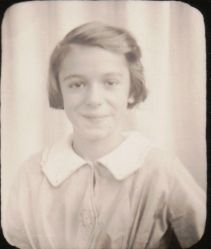 There’s something odd about looking at a photo of a 10 year old girl and reading the words of her obituary: “Her husband of 45 years died in 1993.” It’s like looking into a crystal ball and seeing a future we’re not supposed to know about. Anna certainly didn’t know what life would hold for her in 1934.

At the time of this photo she was living in Peekskill, Westchester county, New York with her parents (Matteo and Agnes Lagana), and two older sisters (Agnes and Margaret). Anna was born in 1923 in New York. The 1930 census listed her as Matteo’s sister rather than daughter; but it’s clear from the age difference and other census records that she was a daughter. Her father was from Italy and her mother from Ireland. Interestingly the exact same family (parents, children, ages, birthplaces) was living in Suffolk, Brookhaven, NY in 1930. The census records were only 14 days apart. The duplication existed in the 1925 NY census as well. One Matteo/Agnes family lived in NYC and another in Cortland, Westchester, NY (likely our Anna).  City directories show Matteo in Peekskill 1924-1927. In 1940, “Matt” and Agnes were still in Peekskill with Anna and younger brother Francis. Matt is a bar tender now, he had worked in grocery before. So far, I haven’t found the duplicate family in 1940.

Any ideas on that??

Here’s a snippet from her obituary: “Anna May Brendel, formerly residing in Tucson, Arizona, died on June 7, 2006 in Pasadena, California from advanced Alzheimer’s disease. She was born as Anna Lagana in Peekskill, New York on September 29, 1923. She married Oswald R. Brendel in 1948, having met him in Saudi Arabia while she was an employee of the Arabian American Oil Company (ARAMCO) for eight years. In 1953 they returned to live in Peekskill until 1961, when she and her family moved to Tucson, Arizona, where she worked as a x-ray technician. In 2002 she then moved to Pasadena, California to live closer to her two sons. Her husband of 45 years died in 1993.”*

The 1888 class of Eastman Business College

Photos of the 1888 class as well as President and Treasurer, Clement C. Gaines and Mrs. C. C. Gaines.

Here’s what the documentation shows: Mr. Clement Carrington Gaines was born on March 15, 1857 in Charlotte county, VA according to a passport application. He was 53 at the time of the application in 1911. The wife Elizabeth he listed was 27. Likely NOT the same wife as in this class photo.

In 1880, the closest census to this photo, 23 year old Clement was living at home in Virginia with his parents and siblings. Parents were Richard V. and either Virginia or Elizabeth Gaines (different names in different years). Clement was listed as a student, his father a farmer. By 1900, Clement had married Mirina E. who was 13 years his senior. They lived in Poughkeepsie, Dutchess County, NY. Clement was a teacher. I believe it is Mirina who is pictured here as Mrs. C. C. Gaines.

The could had no children listed as living with them. But, thank goodness for the 1892 NY census, in that year, in Poughkeepsie, Clement was 38, a professor, no wife was listed, but a young Minerva Gaines was 14 years old. This was likely Mirina’s daughter, but I can’t find anything else after that one census. Was this a mis-recorded wife? Had Mirina already died?

By 1920, second wife Elizabeth had entered the picture. She and Clement, now 62, still lived in Dutchess county, NY with 4 small children – aged 7 to 2. I hope Clement had a lot of energy!

An additional list of life events follows on his Find A Grave memorial. According to that site, he died in 1943 and is buried in Gaines Family Cemetery in Virginia. Other photos of the couple are for sale in an autograph book listed here.

Anyone know what happened to Mirina or Minerva?