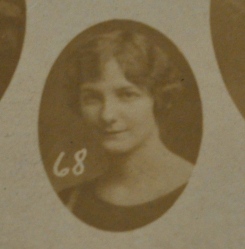 Magdalene had a very sweet young face. She was about 21 or 22 in this photo. She would soon be a full time stenographer at the Gouranda State Homes Hospital in Erie, New York. But in 1925 she lived with her family. Father: Charles Weinman (1871-1941), mother Christina Frey (1873-1965) and brother LeRoy (1904-1980). For all of Magdalene’s life up until 1930 she lived in Wellsville, Allegeny, New York – right next to the county where Westbrook Commercial Academy was. She was the first of two children, born the year after they were married, 1903.

Unfortunately I know little about Magdalene past the 1930 census. Wait, make that nothing. I know nothing past 1930. :(  In 1940 her parents were still in Wellsville and her father would pass away a year later. Both Charles and Christina are buried in Sacred Heart Cemetery in Wellsville. Did she marry? Did she die? Did she move? Right now I have no answers, hopefully a family member does. It seems odd that there is information on every other family member other than Magdalene after 1930, but sometime that’s just how it goes.