Diary #6 of my collection has been transcribed and posted! I have two diaries of Henry Metcalf. This is the first, from 1935 Pennsylvania. The second is from 1945 and will be posted laster this year. I have yet to … END_OF_DOCUMENT_TOKEN_TO_BE_REPLACED

This is the whole 8th grade class of 1928 Reynolds School in Meadville, PA. In the top row end on left is Thomas Vetter at about age 13. In the 1930 census, two years after this photo was taken, Thomas … END_OF_DOCUMENT_TOKEN_TO_BE_REPLACED

UPDATE, Sept 2014: An email from a family member has shed more light on the Mikloda family,

“My great grandfather was Jacob Mikloda. Jacob was married to Susan Filko and had several children including my grandfather, John. John changed the spelling of the family name to McLoda, but I have never been told why. John died in 1958…I have heard the story before of Jacob becoming angry and burning his barns. I have also heard that his arrest caused him to be deported back to Czechoslovakia.”

From the least common name to one of the most common, Julia Mikloda (later Julia Green) was born in Pennsylvania on March 2, 1914. Her parents were Czechoslovakian immigrants in the early 1900s. Julia was the sixth of nine children born to Jacob Mikloda and Susan Filko. Most if not all of her siblings attended Wakeman High School as Julia did. This is her graduating picture in 1932.

The family moved from PA to OH around 1920 and farmed in the area for the rest of their lives. But all was not happy. In 1933, one year after this photo, the Sandusky Star Journal reported that on September 12th Susie Mikloda filed for divorce from husband Jacob. Mr. Mikloda was being held in the local jail for allegedly burning down two barns on the Mikloda farm. That same newspaper reported on December 7, 1933 that Mr. Mikloda was found guilty and the divorce granted.

That explains why Susie and 5 of her 9 children were living without Jacob in 1940. Two of her sons were farming and two daughters were maids. Julia was married by then to Lyle Green and was a new mother. The whole family seems to have stayed in or near Huron county, Ohio and most are buried in Camden Cemetery. Matriarch Susie died in 1950. Julia lived until 1997, outliving her husband by over 20 years.

I’ve not found anyone searching for this family – but when they start it will be easy going. Everything I found on the Mikloda name was about this family! 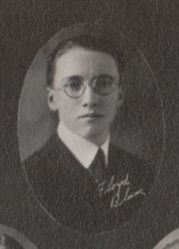 Meet Floyd, as promised, the husband of Dorothy Cowan from the previous post. They were in the same class at Liberty Union High School in Baltimore, Fairfield county, Ohio. Whether or not they were high school sweethearts is unknown. Dorothy, we know, had 3 years of college before she married.

Like Dorothy, Floyd was born in Ohio. According to Find A Grave his birthday was April 14, 1906 and he lived until September of 1981. Unlike Dorothy, not all that time was spent in Ohio. The son of Charles Blum(e) and Nellie Strayer, both of Ohio, Floyd moved with his family to Michigan sometime before 1915. We know this because Floyd and his younger sister Relva (who is daughter is named after apparently) were both born in Ohio, but younger brother Paul was born in Michigan in 1915. Charles was working as a motor builder in Detroit during the 1920 census. Before that, in 1910, he had been an oil well drilling supervisor in Lancaster, OH. Clearly the family was back in Ohio by 1923 for this photo.

I was unable to find Floyd in the 1940 census, but we do know that in 1943 he joined the WWII effort from Philadelphia, PA. And, according to the SSDI, Floyd died in Parksburg, Chester county, PA. Whether he ever remarried is unknown. But he hadn’t by 1943 as he’s listed as “divorced with dependents” on the WWII draft registration card. Floyd is buried in Grandview Cemetery in Fairfield, the same cemetery where his mother is buried.

Kahler brothers, Rush & Will, of Pennsylvania

We’ve met these men before, but they were much younger. This is Rush and Will Kahler, profiled with their parents in a previous post, Henry Kahler & Family. At the time of that family portrait the boys were about 2 and 5. These more recent pictures I found for sale from gretacarbo on eBay (Link to eBay auction). See the auction for more pictures and the back of the photos – some are fuzzy but readable.

In the above photo Rush is on the left and the middle and right are of Will. The middle one has “uncle Will Kahler” written on the back. I wonder who the owner of these photos is, maybe the seller knows. The pictures were taken in Pennsylvania, so apparently the boys still lived there. There were a LOT of online trees with the Kahler family so hopefully these photos will be a welcome addition.

A sweet picture of sisters, Naoma about 18 and Rama the year of her birth 1903 (according to the back of the photo). Naoma and Rama lived in Athens, Pennsylvania. Norma/Naoma, as her name appears, was born around 1885 in … END_OF_DOCUMENT_TOKEN_TO_BE_REPLACED

Yea! I finally figured this one out. A great picture from gretacarbo on eBay for any interested parties. A name, a location, and a relatively easy to date photo – but it still took some time. I guessed correctly that … END_OF_DOCUMENT_TOKEN_TO_BE_REPLACED

I’m afraid I missed the boat on the eBay auction that this originally came from, so I’m going to assume it’s taken!  I apologize for you not being able to purchase it if she’s an important ancestor to you. The … END_OF_DOCUMENT_TOKEN_TO_BE_REPLACED